By the Thames Divided:
Cardinal Bourne in Southwark and Westminster

The English Catholic bishops have not always been noted for their prophetic voice.  In one respect, however, Francis,Cardinal Bourne proved remarkably prescient.  Created cardinal in November 1911, he travelled to Rome to receive the Red Hat from Pope Pius X.  During this visit he stayed at the national seminary, the Venerable English College, where he threw a reception for Roman ecclesiastical society. Waiting to make his entrance, he paced the corridor outside known as ‘the Cardinals’ corridor’, so called from the portraits lining the walls of his compatriots who down the ages had also been members of the Sacred College.  As he did so, the new Cardinal mused ‘that in a hundred years from now he would be no more than one of those portraits of British Cardinals which hung on the walls.’

In fact, Bourne fared less well than most other occupants of the Cardinals’ corridor.  At more that thirty-one years, his is by far the longest reign of any Archbishop of Westminster.  Yet mention ‘Bourne’ to a priest of the diocese today, and they invariably mistake his name for that of his immediate predecessor, ‘Vaughan’.  The obscurity is unmerited.  Bourne’s reign in Westminster covered some of  momentous events of the modern English Catholic Church:  the Education Question at the beginning of the 20th century, the Modernist Crisis, the First World War, the Irish Troubles and Treaty, the Catholic response to the emergence of the Labour Party, the General Strike, the stirring of Catholic social policy and the growing menace of the European dictators.  By temperament and preference Bourne played a quiet role in all these issues, but it was neither passive nor negligible. 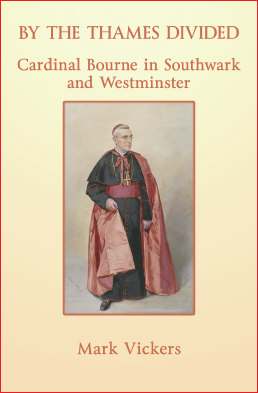