In the story of the dramatic revival of Catholicism in Great Britain in the nineteenth century, the role of the pioneering Rosminian mission is often overlooked. The unflagging zeal of these courageous men had an enormous impact and achieved impressive results – there were literally thousands of converts. The Rosminians, and the seed that they sowed, played a major role in the development of the Church, not just in England, but also in Wales and Ireland.

In this book Michael Hill explores the English background to the mission, an England already undergoing great changes due to the effects of Irish immigration, which only accelerated in the aftermath of the Great Famine.  Introducing the founder of the mission, Antonio Rosmini, he explains the Italian enthusiasm for the conversion of England. Pope Gregory XVI himself came on board the ship carrying the first three Italian missioners led by Aloysius Gentili in 1835 to bless them before they sailed. Gentili and the Anglo-Irishman Moses Furlong preached 50 parish missions: two other Italians, Fortunatus Signini and Angelo Rinolfi, over some 30 years, preached around 250 parish missions and dozens of retreats to clergy and religious or school communities.

Drawing on extensive research in England, Wales, Ireland and Italy, Hill examines the new parish foundations made by the Rosminians – Loughborough, Rugby and London (St Etheldreda’s) in England, and Newport and Cardiff in South Wales. Alongside the men were the Rosminian nuns, working especially in education.  Educational establishments were a notable feature of the Rosminian mission – ten Catholic schools in Cardiff alone, the Catholic public school, Ratcliffe College, in Leicestershire, and industrial schools and orphanages in Ireland, England and Belgium.

John Michael Hill,IC was born in Yorkshire and educated by the Rosminians. He studied at Cambridge before entering the Rosminian Order, and was ordained priest in Rome in 1964. He lives in New Zealand where his ministry has been mostly spent:  teaching in Rosminian schools, and later working for the Bishops’ Conference in adult Education in Faith, and in a Retreat Centre in Christchurch. For twenty years he edited Catholic magazines in Dunedin. His previous book, Antonio Rosmini: Persecuted Prophet is also published by Gracewing 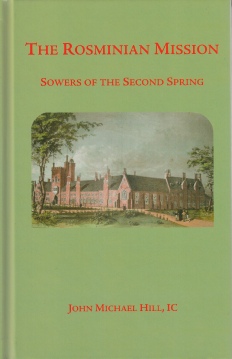