The History of the Foederatio Internationalis Una Voce

Here is a unique contribution to modern Catholic literature.  Leo Darroch presents in chronological order a factual history, fully referenced, of the work of the Foederatio Internationalis Una Voce, a movement of lay people formed after the sudden and insensitive enforcement of  Novus Ordo Missae.  It is the first fully documented account of the decades-long struggle for the preservation of the traditional rite of the Mass in the face of unrelenting opposition from the bishops of the Church.

This book is a straightforward document.  It eschews the debate on the merits of the old rite and the shortcomings of the new.  It does not dwell on the consequences to Catholic liturgy of the introduction of the Novus Ordo.  It simply records in unemotional detail the ways in which for nearly forty years faithful Catholics were denied access to the old rite.

With his masterly present work, Leo Darroch,  the former President of the FIUV, has given to the present and the  future generations of Catholics a valuable documentation of the glorious history of the noble battle of intrepid lay faithful, who were committed to the restoration of the perennial liturgical sense of the Church.  It was a battle of good sons and daughters for the honour and beauty of their mother, the Church,  May this book receive a wide diffusion and contribute in its readers a deeper appreciation of the  perennial liturgical treasure of the Church, which is the classical Roman Rite.

Athanasius Schneider,  Auxiliary Bishop of the Archdiocese of Saint Mary in Astana

Leo Darroch was elected to the Council of the FIUV in 1999. He was appointed FIUV Secretary in 2001 under the presidency of Michael Davies, and served as President from 2007 – 2013. 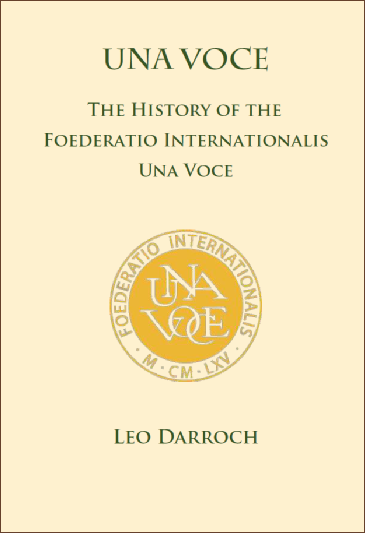