From Burma to Rome
Benedict Rogers

On Palm Sunday 2013, in St Mary's Cathedral, Rangoon, Burma, Benedict Rogers was baptised, confirmed and received into the Church by Cardinal Bo, with Lord Alton as his sponsor. This book tells the remarkable story of his journey to the Catholic Faith, through the lives of those who inspired him, from Burma to Rome. Benedict Rogers has travelled extensively in Asia, reporting on human rights violations and conflict and acting as an advocate for religious freedom. This work has taken him to North Korea, China, Pakistan, Sri Lanka, Indonesia, East Timor, Burma and beyond.

Through his travels, he encountered courageous Catholics whose faith and lives inspired him: Shahbaz Bhatti in Pakistan, assassinated in 2011; Bishop Carlos Belo and the fearless nun, Sister Lourdes, in East Timor; and Cardinal Joseph Zen in Hong Kong. Catholics in public life in Britain, such as Colonel Chris Keeble, the man who took the Argentine surrender at the Battle of Goose Green in the Falklands War, also played a significant part in his path to conversion. Further inspiration came from Catholic writers - G. K. Chesterton, Thomas Merton, Malcolm Muggeridge, Scott Hahn and Pope Benedict XVI. But it was Burma's first Cardinal, Charles Maung Bo, who played the crucial role, inviting him into the Church in Burma. 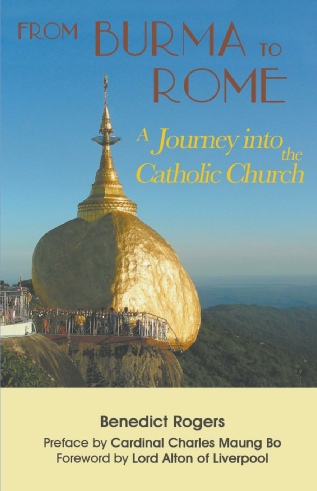