Christians and the State

A Catholic perspective for the 21st Century

Foreword by Lord Mackay of Clashfern

Marriage, abortion and gender selection, human fertilisation and embryology, sexuality, religious education, wearing of religious dress and the display of religious symbols, the use of the Bible or Christian prayers  in public life are all issues confronting contemporary Christians.

The genesis of this book lies in the address which Pope Benedict XVI gave to both Houses of the United Kingdom Parliament in September 2010 in which he spoke of the contribution which religion can and indeed should make to political debate: ‘The central question at issue, then, is this: where is the ethical foundation for political choices to be found? The Catholic tradition maintains that the objective norms governing right action are accessible to reason, prescinding from the content of revelation. According to this understanding, the role of religion in political debate is not so much to supply these norms, as if they could not be known by non-believers – still less to propose concrete political solutions, which would lie altogether outside the competence of religion – but rather to help purify and shed light upon the application of reason to the discovery of objective moral principles’. Later he observed that ‘Religion  ...is not a problem for legislators to solve, but a vital contribution to the national conversation’.

This book looks in detail at the relationship between Christians and the State today and addresses the question of how religion could and should contribute to political debate and also the challenges which it faces. Today there is a substantial body of opinion which would confine religion merely to private belief and would deny religious views of any denomination the right to be heard in public debate.

John Duddington is a barrister and the editor of Law and Justice  ̶  the Christian Law Review.  He is also an Associate of the Centre for Law and Religion at Cardiff University and Secretary of the Medical Ethics Alliance.  He was for many years Head of the Law School at Worcester College of Technology and is married with two children. 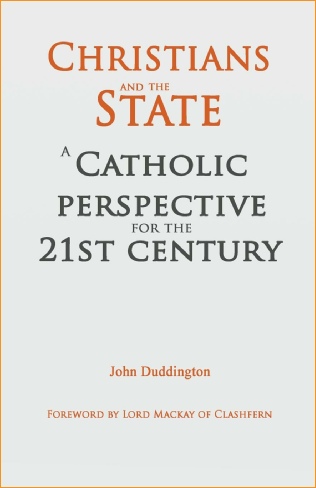