This moving and vivid account recalls the dedicated ministry of priests who ministered to men engaged in a war without precedent.

The First World War brought dramatic changes to military chaplaincy. As the size of the armed services increased so too did the demand for chaplains. Over 5,000 Christian and Jewish clergymen served as chaplains and of these 800 were Catholic priests. Despite the huge size of the Royal Navy and the large number of Catholic sailors, far fewer priests served as naval chaplains.

Priests exchanged their normal routine for theatres of war. All chaplains lived in the same conditions, experienced the same dangers, and witnessed the same carnage as the men they served. Chaplains celebrated Mass, administered the sacraments, tended the wounded, buried the dead and brought spiritual comfort to men in need.

Their commitment earned them respect and admiration. Some chaplains were killed, others were wounded, gassed or died of natural causes. Many were decorated for bravery. It was not a ministry for the faint hearted and their wartime accounts and post-war reflections bring home the true nature of their apostolate. As they worked with those of other denominations, the seeds of ecumenism were sown for a few.

Dr James Hagerty has written and lectured extensively on Catholic military chaplaincy and Priests in Uniform is a work of meticulous research. It is a moving testimony to the unique and brave ministry of many priests and a fitting centenary tribute to the Catholic Bishopric of the Forces. 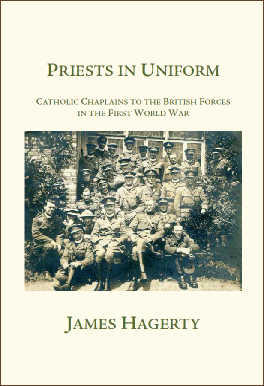