During the reigns of Elizabeth I and James I it was high treason, and therefore meant death, to be a Catholic priest in England.  It was consequently vital that there be somewhere to hide when the pursuivants came battering at the door.  One name is prominent in the construction of priest-holes-that of Nicholas Owen.  A very short and later crippled man, he built the majority of these shelters, so saving the lives of untold numbers of priests and fugitives.  His early apprenticeship as a joiner and his knowledge of construction served him well as he burrowed into walls and constructed near- invisible entrance holes.  Although a well-known figure in Recusant studies and almost invariably mentioned in histories of the Gunpowder Plot, this is the first detailed biography.

St Nicholas Owen was born in Oxford, the son of a carpenter.  Two of his brothers were to train as Catholic priests on the continent.  A third, Henry, the first apprentice at what was to become the Oxford University Press, went on to assist the Mission with the production of Catholic books and pamphlets.  Nicholas was himself apprenticed to an Oxford jointer in 1577.

Acting as a servant to Fr Henry Garnet SJ for nearly 20 years, Owen had many adventures, narrowly evading capture, and assisted in the escape of the Jesuit Fr John Gerard from the Tower of London in 1597.  St Nicholas was tortured at the Poultry Compter in 1594, but later released.  He was finally taken in one of his own priest-holes during the rigorous pursuit of Catholics that followed the failure of the Gunpowder Plot, and died upon the rack in the Tower in 1606.

Evidence of St Nicholas Owen’s work is still visible in country houses and mansions across England. 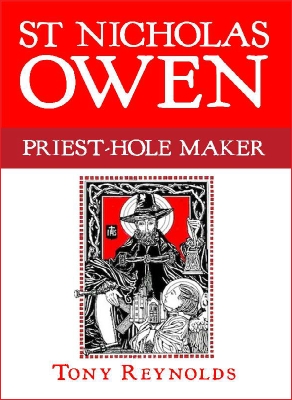