Philip Howard, Earl of Arundel (1557-1595), son of the 4th Duke of Norfolk, reached adulthood forty years after the execution of Thomas More and John Fisher when the Elizabethan Reformation was well under way. No less than 819 monastic communities had been dissolved by Henry VIII; the Mass and even the Rosary had been banned; the iconoclasts had ransacked the parish churches; the law had proscribed the Catholic faith; the new religion of the Church of England had repudiated many of the main teachings of the Catholic Church including the doctrine of transubstantiation; a succession of laws held anyone identified as a Catholic priest guilty of treason and condemned to fines, torture and execution; and 183 English Catholics were put to death between 1577 and 1603.

In many ways Philip’s fate can be compared to that of his great spiritual precursor, Thomas More. Both were highly-placed courtiers of the reigning monarch. Both were conscientious objectors to the Act of Supremacy which affirmed the monarch’s claim to be supreme head of the Church of England. Both were imprisoned in the Tower of London and sentenced to death. Both showed a forgiving spirit and died reconciled in their hearts to those who had condemned them. Unlike Thomas, Philip did not hold any public office, but he had the standing of the country’s premier Earl, and his repudiation of the newly-established Church was potentially very injurious to Queen Elizabeth’s claims. However, he was guilty of nothing other than obeying his conscience and in this offers a timeless inspiration similar to that of St Thomas More.

The book includes the full text of some of St Philip’s most beautiful writing, including
A Lament for Our Lady’s Shrine at Walsingham. 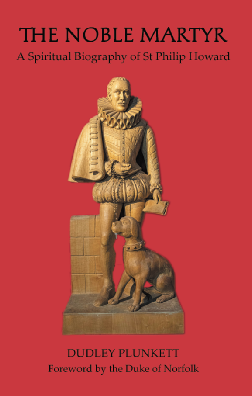