Year of the Lord’s Favour

A Homiliary for the Roman Liturgy

This Homiliary provides a comprehensive guide to doctrinally based preaching for the entire Church year, presented in the Dominican tradition: a preaching of Scripture which takes doctrine as guide to the clarification of the Bible’s main themes.    Doctrine is necessary to preachers because in its absence the Scriptural claims and themes do not easily hang together.

The grace the Word imparts always has a reference to the Mystical Body which mediates all the grace that is given by Christ as the Head.  So, precisely as a fruit of grace, preaching is necessarily related to ecclesial awareness.  Doctrine ensures that preaching does not fall short of its true dimensions – expressing the biblical revelation, the faith of the Church.  Preaching about the lives of the saints is a partial exception to these principles – every saint throws light on some aspect of the mystery of Christ and the Church  – and provides the subject matter of the first volume of Year of the Lord’s Favour. The second, third, and fourth volumes of the Homiliary cover between them the Temporal Cycle of the Church of the Roman rite:  the second volume furnishes texts for the Privileged Seasons – Advent, Christmastide, Lent and Eastertide; the third for Sundays through the Year; the fourth for Weekdays through the Year.

Aidan Nichols, a Dominican of Blackfriars Cambridge and a member of the Faculty of Divinity of the University of Cambridge, is surely the most prolific Catholic theologian writing in English today. Other titles from Gracewing include Catholic Thought Since the Enlightenment, From Hermes to Benedict XVI and, co-authored, The Council in Question: A Dialogue with Catholic Traditionalism. His new commentary on the Holy Rosary, Lessons from a Rose-Garden is also published by Gracewing. 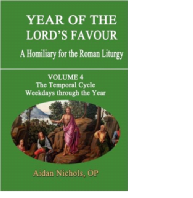