God, the Almighty, chose for himself as the place of his appearance what was the very

smallest and most insignificant, a wretched stable in Bethlehem.

When asked to comment on this, Joseph Cardinal Ratzinger commented: ‘…it is a fact that the choice of “little things” and “little people” is characteristic of God’s dealings with humanity. Francis and Thérèse Great “Little” Saints expresses how this “characteristic of God’s dealings” with men and women is at the heart of the spiritual life of Francis of Assisi and Thérèse of Lisieux. If  Baptism plunges us into the Paschal Mystery of Christ, this man of the thirteenth century and this woman of the nineteenth expressed its energy of dying to self and rising to life in Christ through a path of littleness. The pursuit of growing in an awareness of being little, of focusing on the little people, the little things, and the little actions of daily life! The challenge of being lesser before others as we are before God! Such is the energy of Francis and Thérèse that needs to be revitalized so that the hands of those of us in the twenty-first century may join theirs in making the world a new Bethlehem.

Patricia Jordan is a Franciscan Sister Minoress, and author of An Affair of the Heart: A Biblical and Franciscan Journey and Come Apart and Rest Awhile, both published by Gracewing. 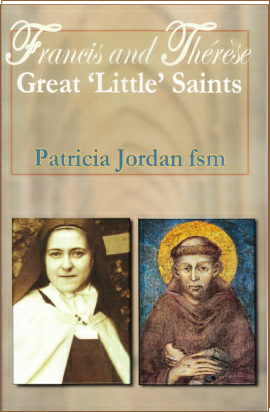