The Burden of Betrayal

The impact of the Catholic Church’s child sex abuse scandals has been devastating to the Church’s own non-offending priests.

A detailed analysis of the perspectives of a select group of representative priests reveals that the scandals and the Church’s often unsatisfactory handling of them have left significant psychological scars which the Church and even many clergy themselves have yet to recognise and address. Revd Dr Barry O’Sullivan, who is both a serving priest and a qualified counsellor, finds in his series of carefully controlled interviews with fellow priests that his beleaguered brotherhood have been overlooked in this ongoing crisis for the Church.

Originally undertaken as a doctoral study for he University of Manchester, this work casts new light on the far-reaching effects which this type of crisis can potentially inflict not just on Catholic priests but also on professionals in all walks of life which have been assailed by child sex abuse scandals.

“The Burden of Betrayal” highlights the rippling waves of trauma in the tragedy of child sexual abuse. Our first concern is and must be the child. But closely following the victim’s trauma is the pain of the family, and then all those closely connected. This includes the parish where the abuse occurred, especially if the perpetrator is a priest. Fr O’Sullivan has convincingly demonstrated the profound effects even upon non-offending priests; feelings of betrayal, fear, shame and grief are non uncommon. These need to be attended to and the healing ministry to these priests by Fr O’Sullivan and others like him is much needed. The author was inspired, and likely the reader as well, that, despite the sometimes shattering trauma of child sexual abuse by some priests, the non-offending priests remained committed to ministry, committed to the faith, and committed to the Catholic Church. This is the grace of God at work and a sign that we will and are moving through this crisis. We will become purified, stronger and, God willing, a safe place for children.

The Catholic University of America 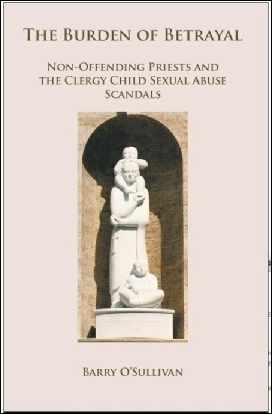