International Eucharistic Congresses entered the mainstream of Catholic life in the 1880s. They have played a huge part in spreading the Church’s social teaching;promoting early and frequent Communion; championing the Kingship of Christ; encouraging the worldwide mission of the Church; supporting the movement for peace after two world wars; deepening understanding and love of the Eucharist. The countries which have hosted these Congresses have been the first to benefit. Delegates from other countries have also taken valuable lessons back home. Nothing substantial however has been published in English to inform the general reader about the rich treasures offered by all these Congresses.

For a long time there has been a real dearth in Catholic publishing on Eucharistic Congresses, the rich
spiritual and theological material they produced over the years, and what it was like historically and
personally to have been at them. Fr John Allen’s sparkling account of both aspects in his new book on
this very theme is like manna from heaven for all those who have searched in vain for something on
this subject, so essential to the Church’s Eucharistic tradition.
His writing style lends itself to such a diverse subject. Obviously with so many Congresses between 1973
and 2016 —and he has been at them all—you have to be selective. At a brisk pace and with just the right
phrasing every time, he covers his ground like a professional tour guide who knows exactly what you
will want to see and tells you just enough to maintain your interest. Partly journalistic report, partly
spiritual reflection, his combination of the sacred and profane keeps you turning these pages in a
compelling read.
Fr Oliver Treanor

What has been needed, and what many people have longed for, is something that everyone can
access, and in plain English. Unavailable until now, here it is, and totally new! The author’s clear
style will appeal to all and his distilling of the meditations of some of the finest theologians in the
world will provide endless spiritual nourishment. Here we have an opening up of Eucharistic
thought over many years, closely observing the way it has developed, and bringing us nearer to
Christ the Bread of Life and His Mystical Body, the Church.
Cardinal Vincent Nichols, Archbishop of Westminster

MGR JOHN FRANCIS ALLEN is a priest of the Salford Diocese in England. He was present in St Peter’s
at the opening of the Second Vatican Council in October 1962, the month he was ordained priest
after studies at the Venerable English College and the Pontifical Gregorian University in Rome.
He has served in various parishes and as bishop’s secretary in the Salford Diocese and is currently
parish priest of Our Lady of Grace, Prestwich, Manchester. A member since 1999 of the Old
Brotherhood of the Secular Clergy of England and Wales, he was elected President in 2014. He
has attended all twelve of the International Eucharistic Congresses since 1973. 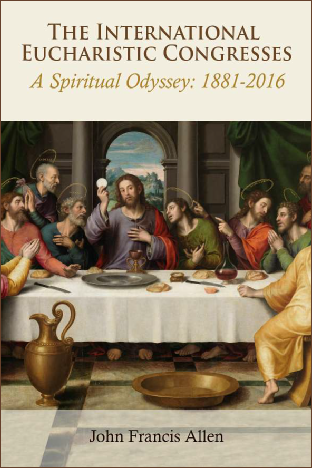