The Emergence of Ampleforth College as ‘the Catholic Eton’

The origins of Ampleforth were in the school run by the Benedictine community of St.Laurence at Dieulouard in Lorraine. This was one of several foundations established on the continent by English Catholics at the end of the sixteenth and start of the seventeenth centuries to continue the religious practices outlawed in England, to provide the education of the missionary priests necessary for the maintenance of a Catholic community within England during penal times and to provide a Catholic education for the sons of the Catholic aristocracy and gentry. In the aftermath of the French Revolution the school  was eventually to settle in Yorkshire, and was originally intended only for the education of boys who would enter the religious life. In the course of the 19th century however it was to develop into England’s pre-eminent Catholic public school.

For good, or ill, public schools educated most, and continue to educate many, of those occupying key positions within the British Establishment. This study examines the emergence of Ampleforth College as the leading Catholic public school and its part in the integration of Catholics into the British elite. It considers the extent to which a Catholic educational tradition had to be adapted in the process of creating a Catholic public school and why it was Ampleforth that emerged from the ranks of Catholic schools to become the ‘Catholic Eton.’

This book provides a fascinating overview of developments in Catholic education, for the middle and upper classes, from the nineteenth century; insight into the Catholic educational tradition as it emerged from penal times and its adaption to educational developments made in English public schools in the nineteenth century; and a detailed study of the Ampleforth community and its relationship with its school. 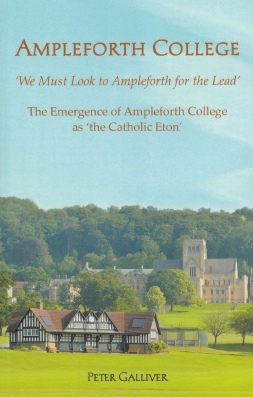