The Testaments of the

Many writers on the spiritual life have used the analogy of climbing a ladder, as we progress towards that degree of perfection which Our Lord demands of us, ‘Be ye perfect, as your heavenly Father is perfect’ (Matthew 5:48).  It must originate in the story of Jacob’s Ladder, on which he saw the angels ascending and descending – and since humility is the key to all virtue, who is to say whether we should be trying to go up, or to go down.

The Rule of St Benedict is the most familiar of those writers who speaks of the Ladder of Humility, in chapter 7 of his Rule. There are twelve steps, and that at once makes us look out for other things that go in sets of twelve.  There are twelve Apostles, of course, and they respond to the twelve Tribes of Israel.  There are twelve Minor Prophets.  In St Paul there are twelve Fruits of the Holy Spirit , and  in the earliest Christian writings after the New Testament itself, we find the Shepherd of Hermas, which speaks of twelve virgins, who are virtues, opposed to twelve women who are vices. Another  very important document from this period, which has been strangely neglected, is the Testaments of the Twelve Patriarchs, which again looks at twelve virtues and their opposites.

Now the Testaments of the Twelve Patriarchs are worth reading, as it is seems to be the very first systematic Christian treatise on moral theology, for the twelve Patriarchs each discourse about some aspect of virtue or vice.  It is written in the form of ‘Testaments’ or last speeches by the twelve sons of Jacob, addressed to their family gathered around them, each on his deathbed, on the model of the Biblical testament of Jacob. It was written in Greek, and has been dated to the very end of the first century and seen a Christian work, using the literary form of a pseudepigraphon, or what we might call a ‘historical novel’.  Later Protestant editors thought it was Jewish, and much earlier, as far back as the second century BC, but with a few Christian interpolations.  This is probably why it has been neglected, though if it really is a pre-Christian work, we would have to put it among St Paul’s favourite books, for he seems to quote it many times.

Recent scholarship places the text it at the end of the first or beginning of the second century, contemporary with St Ignatius.  In fact, whether it is a late Jewish book which only survives in an early Christian edition, or a new composition by an early Christian drawing on Jewish predecessors, matters not a jot.  The fact that early Christians edited it or wrote it, and certainly read it, is very significant: it is strange that it has been so neglected.  It is an important witness to the Early Church, it shows what the second or third generation of Christians thought and believed about the path to virtue, and acts as a guide to the contemporary Christian today. 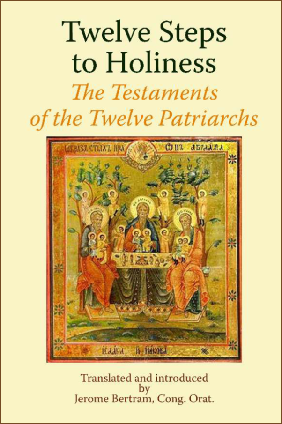