My Campaign in Ireland

Catholic University Reports and other Papers

with an Introduction and Notes by

This volume of John Henry Newman’s Catholic University papers, collected and arranged by his private secretary William Neville, was printed for private circulation in 1896, six years after Newman’s death. Since then, it has only been reproduced in facsimile.

My Campaign in Ireland, Part I brings together all the most important documents penned by Newman in his efforts to establish a Catholic university in Ireland. As founding rector, Newman was fully involved in every aspect of the university from 1854, when it opened, until 1858, when he resigned. The discourses he composed in 1852, to prepare for the university’s foundation, form the first half of The Idea of a University, Newman’s great classic work on education; but the foundational documents in My Campaign in Ireland, Part I demonstrate how he was able to turn theory into practice in adverse circumstances. Filling out Newman’s vision of education, they show how he should also be esteemed for his practical contribution to education.

While these university papers are a treasure for anyone alive to Newman’s educational genius, they contain an additional item that gives the collection a special significance: Discourse V which Newman omitted from the Idea.

This volume is the first critical edition of My Campaign in Ireland, Part I. The editor, Newman scholar Paul Shrimpton, provides an introduction and comprehensive footnotes. These elucidate the significance of the volume’s various documents by providing a historical context for Newman’s educational endeavours in Dublin. In addition, English translations have been supplied for documents that were originally in Latin.

My Campaign in Ireland

My Connection with the Catholic University

with an Introduction and Notes by

My Campaign in Ireland, Part II represents Newman’s verdict on his frustrating years as founding Rector of the University. In describing the causes of his ‘campaign’s’ failure, he is not afraid to criticise those who shared responsibility with him, not least his co-founder Archbishop Cullen and even Pope Pius IX. These candid writings show Newman’s toughness and fairness in his dealings, and how his powers of diplomacy were stretched to the limit.

The editor of this critical edition, Paul Shrimpton, has provided an Introduction and comprehensive footnotes to both the Memorandum and the Appendix, enabling the reader to make sense of the conflicts and viewpoints they describe and providing the historical context. Together with My Campaign, Part I, this volume makes essential reading for understanding what happened when Newman tried make his Idea of a University a reality.

Dr Paul Shrimpton read Mathematics at Balliol College, Oxford, and gained his doctorate in history of education at the Institute of Education, University of London. He has published A Catholic Eton? Newman’s Oratory School (2005), The ‘Making of men’: the Idea and reality of Newman’s university in Oxford and Dublin (2014), and Conscience before conformity: Hans and Sophie Scholl and the White Rose resistance in Nazi Germany (2018) – all with Gracewing. He teaches at Magdalen College School, Oxford 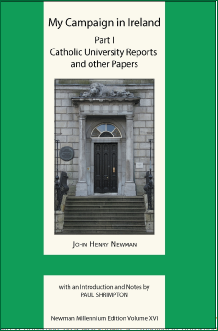 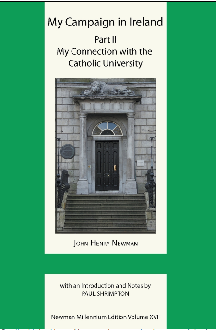