Poet of the Sacred Cosmos

and Prophet of a Christian Ecology

Although Paul Claudel (1869-1956) was a great poet, not simply a great Catholic poet, he has suffered from neglect in the English speaking world.  Recently, there has been growing interest in the relationship between Theology and Ecology; the connection between Theology and Literature is also being more fully explored. These themes come together in the work of the French poet Paul Claudel.

Current ecological concerns provide an excellent context within which to look at the work ; a century ago, his poetry was already addressing such issues in a way that is still fresh today and from within a traditional Catholic framework. Arguably, it does so more consistently than the work of any other creative writer. His work carries all the more conviction since it was never consciously composed with contemporary ecological concerns in mind, but was simply the outcome of his profound, patristic understanding of the cosmic dimension of the Incarnation ― Comparisons are made with the writings of Maximus the Confessor, (the “cosmic theologian”). Claudel influenced several young theologians who were later to become household names and who admitted their debt to him: Hans Urs von Balthasar, Henri de Lubac, Jean Daniélou and Pope Benedict XVI.

Focusing on Claudel’s own work, Michael Donley demonstrates the importance and relevance of poetry in sensitising us to the fact that the ecological problem is essentially a spiritual one. As Patriarch Bartholomew I of Constantinople, the same Patriarch who is given prominent mention in Pope Francis’ Laudato Si has said “Theologians often seek metaphysical answers to contemporary problems, but the truth is that we need more poetry in our theology” quoting by way of example Claudel himself: Only a soul made pure can understand the fragrance of a rose. There is an obvious link here with the patristic―rather than Romantic―understanding of the “contemplation of nature” and the discerning of the divine logoi inherent in all creation. 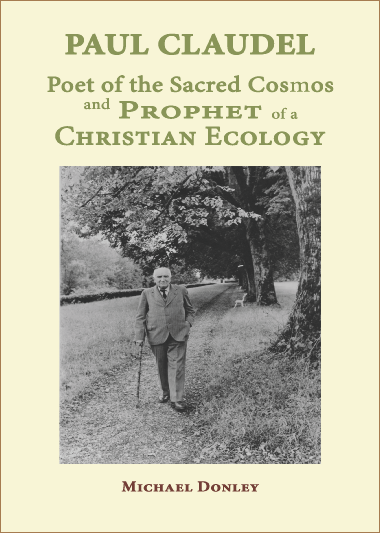