The English Pilgrimage to Rome

A Dwelling for the Soul

‘A dwelling for the soul’, the subtitle of this book was a description of Rome coined by the daughter of the Earl of Shrewsbury, who married a Roman prince in the 1840’s, and fell in love with the Eternal City. She was part of a tradition of English pilgrimage to Rome stretching from the time of the Venerable Bede to our own day. Rome has attracted and repelled the English, often in equal measure, but generations of pilgrims have sought that ‘dwelling for the soul’ within its walls.  Rome has given its own meaning to the ancient tradition of pilgrimage, and this has changed over the centuries as history has reshaped its relationship with English religion, politics and culture.  This book explores that constantly changing relationship between Rome and England and the reinterpretation of the pilgrimage tradition over the course of more than a thousand years.

A fascinating narrative of the changing attraction of Rome to the English, from Saxon pilgrims down to the less strenuously pious hordes of the 20th century package tour. Eamon Duffy 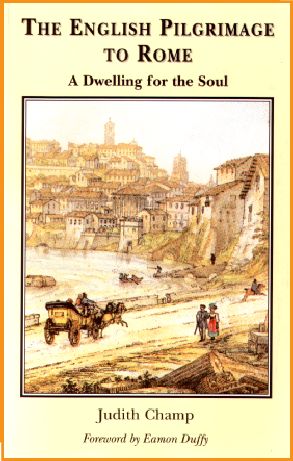