ANGELO MARIA RINOLFI was born of humble peasant stock and into a very pious hardworking household in the far north of Italy, close to the border with Switzerland. He was destined to become a Rosminian priest and to be sent after ordination on mission to the British Isles where he remained for the rest of his life. He was in character a quiet man, but quickly won the reputation of being a formidable preacher. He had a natural gift for languages and was proficient in at least five; his spoken and written English became perfect. After teaching for some years at Prior Park in Bath, he was tasked to conduct parish missions all over Britain and Ireland. No other preacher at that time so touched the hungry hearts of vast congregations of people. Very many Protestants came into the Church as a result of his missions, while tens of thousands of cradle Catholics were moved by his preaching and persuasive eloquence, with their prayer and their sacramental lives inspired to a new regularity and fervour. Rinolfi preached nearly two hundred of these missions over twenty-five years. He gave priority to work in Ireland, especially following the terrible famine of the 1840s, and was acutely conscious of the centuries-long sufferings inflicted on the Irish people by successive English governments. Working from the Rosminian centres of Loughborough, Rugby (where as Provincial he was based for more than twenty years, and where he is buried) and Newport in Wales, his missions traversed the whole of Great Britain. In Ireland he worked year by year in Dublin, Drogheda, Newry, Belfast, Derry and in towns and villages throughout the country, particularly in Mayo and Galway. Angelo Maria Rinolfi founded no institutions: no schools, no new parishes, no other charitable works bear his name. His influence was purely through the spoken word. His deep personal piety and his sustained contribution to the Rosminian charism of evangelisation in the United Kingdom and in Ireland in the nineteenth Century remain an inspiration today.

JOHN MICHAEL HILL, IC was born in Yorkshire. Educated by the Rosminians, he studied at Cambridge before entering the Rosminian Order. He lives in New Zealand where his ministry has been mostly spent. His previous books, Antonio Rosmini: Persecuted Prophet and The Rosminian Mission: Sowers of the Second Spring are also published by Gracewing. 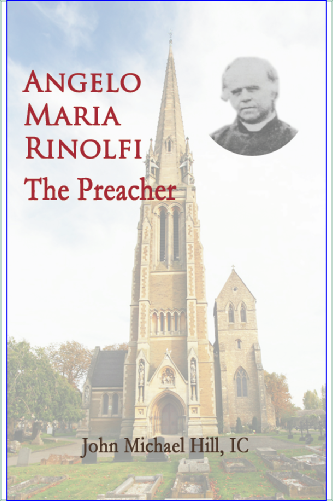