with Special Reference to the Thought of John Henry Newman

The sensus fidelium has come to be seen as a key concept in the development of Church doctrine and teaching, and Blessed John Henry Newman as a seminal exponent of it - particularly through On Consulting the Faithful in Matters of Doctrine, his own essay on the topic.

Kathleen Kirk provides a useful introduction to the nature of the sensus fidelium: its terms of reference, its history, the views of post-Vatican II theologians on the matter, and how these can be viewed in the context of Newman's own thought and teaching. The sensus fidelium came to have a particular significance for many theologians writing in the aftermath of Pope Paul VI's 1968 encyclical On the Regulation of Birth (Humanae Vitae), and the question of the sensus fidelium in relation to opposition to the Magisterium of the Church is fully explored.

From her analysis of the sensus fidelium in the first part of the book Kathleen Kirk shows how there does not at present exist among the faithful as a whole a true sensus fidelium as far as marriage and sexuality are concerned. She takes this further with a study of the sensus fidelium in relation to marriage and sexuality based upon the teaching contained in Pope John Paul II's “Theology of the Body”. Crucial to that teaching is the existence of marriage as one of the sacraments of the Church (and outside the Church as having a sacramental character), and she demonstrates that it is from awareness of this sacramentality that a study of these Life issues should begin. 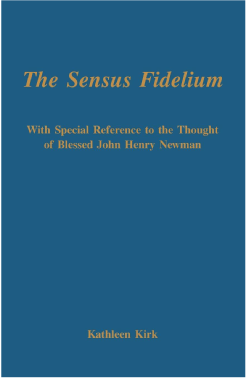