A History of the Catholic Faith in Norfolk, Suffolk, Cambridgeshire and Peterborough

However, this book also celebrates over 450 years of the continuous survival of the Catholic faith in East Anglia, after Catholicism was outlawed by Queen Elizabeth in 1559.

Without the witness of the men and women who cherished the Catholic faith during centuries of persecution, discrimination and marginalisation, the present Diocese of East Anglia could never have come into being.

This book tells the story of the Catholics of East Anglia since the Reformation. Some of them have been much studied, others not at all, but their collective story has never before been the subject of a dedicated volume.

Sir Henry Bedingfield, 1st Baronet of Oxburgh (1614-85), sheltering with his family under the protecting mantle of Our Lady during the English Civil War 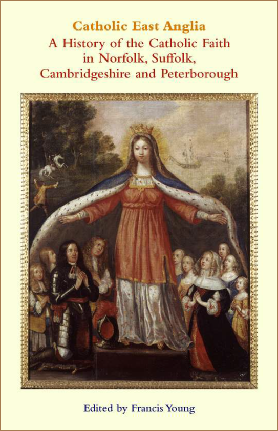