James Ambrose Cotham OSB (1810-1883), a Douai monk of the English Benedictine Congregation, was active in the early colonial period in Tasmania as a convict chaplain, and after 1851 as a missioner in England with many and varied relationships with family, co-workers, and religious communities.

From extensive use of his surviving papers, Joanna Vials has researched  his mission, colonial and convict, in Van Diemen’s Land between 1835 and 1851, followed by the period spent in Cheltenham, 1852 to 1873, when he was responsible for building Charles Hansom’s Gothic Revival church of St Gregory the Great. His life, therefore, belongs to the general studies made of Catholic life in the mid-19th century mediated through the contribution of the English Benedictine Congregation.

The social climate around Ambrose Cotham’s mission was one of opposition. Nevertheless, he was highly effective in working with transported convicts, especially women, in Van Diemen’s Land, despite inadequate resources from government departments and personal antipathy from his Benedictine superior, Archbishop Polding of Sydney. In fashionable, Evangelical Cheltenham, he brought together the aspirations of the rising professional class of English Catholics, predominantly converts, with the needs of alienated Irish immigrants.

Throughout his life, Cotham remained close to his family, in Lancashire and Australia, withstanding the censure this brought from some of his Benedictine confrères when he used personal financial resources for their benefit. His brother Lawrence died as an ‘old colonist’ whose family had become thorough-going Australians within one generation, for good and ill.

‘Everywhere he was a welcome guest as he had a particularly courteous and gentlemanly manner and yet very simple-minded.’ The reputation for simplicity stayed with him, as well as his tenacity, humour, combativeness, and the greatest dislike of rain. By focusing on the wide reach of this life, insight is gained into the interlocking relationships of family and society in developing the spirit of an age. 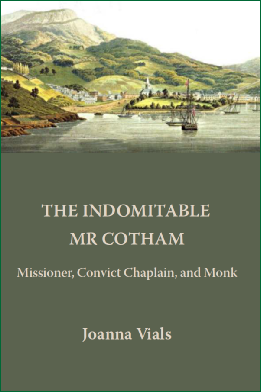