Illustrations by a monk of Silverstream Priory

During the Middle Ages the shrine of St Thomas Becket at Canterbury was the third most important shrine in Europe, after Rome and Santiago de Compostela.  St Thomas’s murder on the 29 December 1170 caused shock and outrage throughout England and beyond, but it also ushered in an extraordinary cult of devotion to the martyred archbishop who became a symbol of liberation against tyranny. Through the extraordinary wealth of miracles worked through his intercession, he quickly became a refuge and advocate for the sick and afflicted. It is no exaggeration to say that Canterbury was a medieval Lourdes where instead of pilgrims immersing themselves in the waters of a spring, they made their way beneath the tomb of the martyr and prayed that grace would be poured down upon them.

This little book offers new devotions to St Thomas with the aim of encouraging Christians to rediscover this martyr’s life and to count him among their companions on the pilgrim road we now walk.  Among these devotions is a new novena for Christmas, beginning on Thomas’s birthday and ending on his heavenly birthday - his dies natalis: the day of his martyrdom and feast day.  There is also a programme for a pilgrimage to Canterbury based on the Catholic tradition of the Stations: this pilgrimage can be undertaken in the city itself, or spiritually at home or in one’s local church. Other little prayers are offered for various needs: a new litany to the Saint, prayers for the sick, for the Church and for our priests.

When Thomas was invoked miracles were poured out upon the faithful, there is no reason to discount that they can be again – physical miracles, yes, but perhaps also in this time, when the greatest afflictions are those of the mind, heart and soul, Thomas can be as effective in soothing the infirmities of modern men and women, many of whom suffer in silence and alienation. Includes:

Fr John Hogan A parish priest of the Diocese of Meath in Ireland has experience of chaplaincy, teaching, preaching, retreats, and broadcasting. With EWTN he is co-Host of the network series Forgotten Heritage, and is Father Director of the international Fraternity of St Genesius, an organization which prays for and supports those engaged in theatre, cinema and the arts. 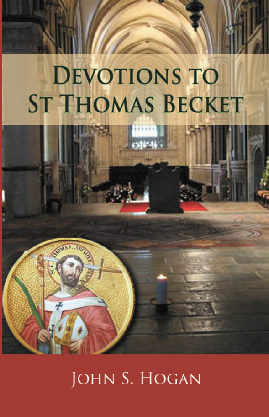